It goes without saying that there are separate golf clubs for men and women. Only a few professional-level female golfers use men’s clubs because of their exceptional swing speed. But, on average, women have a slower swing speed than men. And that’s why the differences in golf clubs. That said, it’s time to review the best golf irons for women.

What golf irons do is maximize distance. So, in a way, these irons compensate for your lack of faster swing speed or any other golfing skill that you’ve been struggling with.

Just make sure you get a custom fit iron. Because only then does the golf club cater to your specific swing tendencies, such as spin rate, swing speed, launch angle, ball speed, and more.

Enough said, it’s time to get down to business! 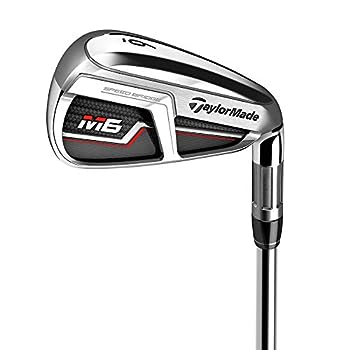 You know TaylorMade is all about the latest technology. The proof of which, in this case, is the inclusion of the exclusive Speed Bridge composition in these TaylorMade irons. The structure unlocks the potential of Speed Pocket to boost ball speed. And so does the extra stiffness in the clubhead of the M6 irons.

Even the clubface is equipped to deliver increased ball speed with its Inverted Cone technology. All 3 irons are optimized for playability and forgiveness because of their lower CG that elevates not only ball speed but also the launch angle. And that means a penetrating, strong ball flight even in the case of low-clubface impact. 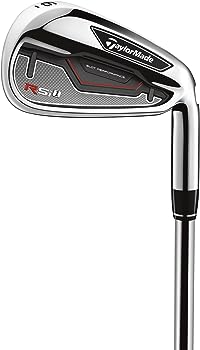 Even the TaylorMade RSi1 is engineered with Speed Pocket for promoting faster ball speed. The iron has an excellent whippy shaft ideal for women trying to better their swing speeds. Even the high-quality grip is a praiseworthy feature.

TaylorMade time and again proves that they deliver the most advanced technology for improving your game of golf. The best part about RSi1 is that it features two slots. One near the heel and the other near the toe. And both offer uniform flexion all across the clubface. So expect no disappointments with the brand’s latest irons. 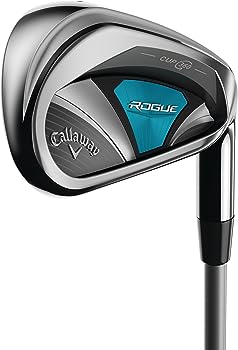 You know these Callaway Rogue Irons are engineered for women once you find out that they’re outfitted with a combination of 360 face cup and VFT. Together, these two features promote ball speed. Then there’s MIM’d Internal Standing Wave to give you optimal control and flight.

Many women even appreciate the exceptional urethane microspheres simply because of the great feel they provide. Your game is sure to improve by 4 to 5 strokes per round with these Callaway irons. 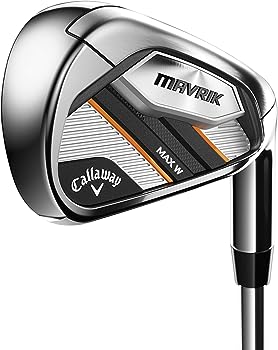 Artificial Intelligence in a golf iron; an accomplishment only a brand like Callaway can achieve, that’s for sure. The Mavrik Max Iron Set significantly boosts ball speed with its sophisticated clubface structure that’s unique for every loft. On top of that, the weights are infused with custom tungsten, so you can locate the precise position of the CG in every iron.

Much like the previous Callaway irons, urethane microspheres are a part of this set too for absorbing unwanted vibrations. So there’s no denying that these Mavrik irons are designed for increased forgiveness and distance. 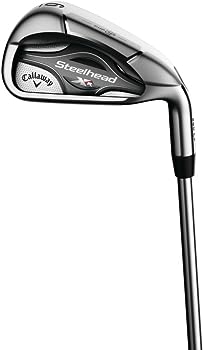 Yet another Callaway innovation in the form of the Steelhead XR Individual Iron. That combines control, distance, forgiveness, and speed. The highlight of the golf club is the next generation, industry-leading 360 face cup for boosting ball speed. And not just on center hits but also on off-center strikes.

Unwanted vibrations get absorbed, all thanks to the steel-infused, soft Shock Eliminator technology. This also lowers the CG to promote a higher launch. And the thing that brings into the picture more forgiveness is the new hosel design. It saves a large amount of weight that’s repositioned strategically in the clubhead. 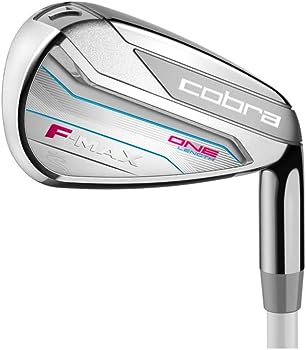 Re-engineered for the weighting of 7 iron, Cobra F-Max features an offset design for creating a higher launch. And the higher launch offers increased draw bias to promote more accurate, straighter shots. With a premium chrome finish, these low-profile, deep-undercut irons excel in the departments of durability and aesthetics as well.

The set includes specialty wedges to add more versatility and even greater shot control around the greens. So if you’re a relatively new golfer, these irons are definitely helpful when it comes to getting the golf ball up in the air. 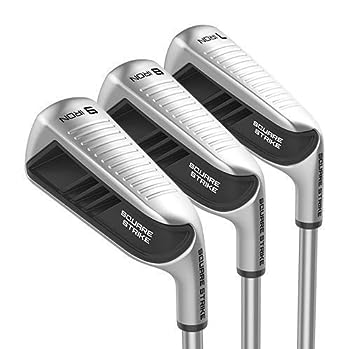 By far, these are the most forgiving irons in many ways. The Square Strike Iron Set is the perfect choice for women golfers with a high handicap. A very simple golf iron set with straightforward, forgiving clubs for playing a consistent game on the course.

The added clubhead mass here hits the same distance in comparison to conventional irons, even with slower swing speed. But the best part about these golf irons is that they allow you to hit straight with a more controlled swing movement. 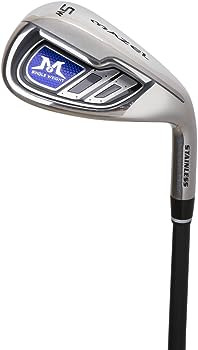 These are stainless steel irons built with a large sweet spot for accuracy, forgiveness, and distance. The CG, needless to say, is low to get your golf ball to fly longer and straighter with more speed. And lastly, there’s the anti-slip, shock-absorbent rubber grip. 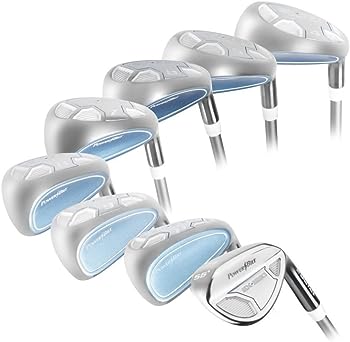 If you’re looking for the easiest-to-hit iron set, then here’s the ultimate deal for you. This is an iron set that consists of hybrid design long irons and short irons. The long ones have a wide sole for forgiveness. And the short irons are built with a narrow sole for precision.

Hybrids are an excellent way to improve your golf scores. So if that’s your priority on the turf, then you’re most likely to not regret buying these enclosed hollow cavity structured irons that enhance distance, even on off-center shots. 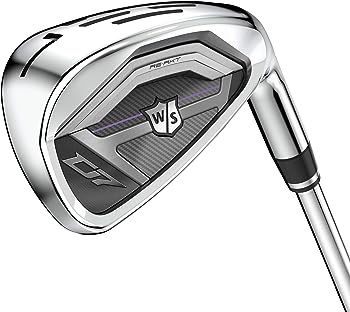 This is Wilson 7-piece iron set for women golfers looking to maximize distance. The long irons of the set consist of three Power Holes rows. This, unquestionably, boosts distance. As for the shorter irons, they’re outfitted with fewer Power Holes and optimized weighting to maximize precision and feel.

All irons have a cleaner top line, improved weighting, and straighter lines for boosting the aesthetic value. You’re also likely to appreciate the ultra-thin clubface. It’s hot and responsive to pave the way for better feel and longer shots.

The most common mistake many golfers make, both male and female, is buying irons that don’t suit their golf swing and game. So it’s important to select the right set that fits your playability. And when taking that into account, a number of factors come up.

As for super game-improvement irons, they deliver more forgiveness, which is the most useful for high handicappers. Player’s irons, on the other hand, are crafted for experienced golfers. These achieve the most solid response only when struck the right way.

Flex refers to the level of bend of the golf club. For women golfers, there’s the “Ladies” flex. Generally speaking, shaft flex should be stiff with faster swing speed. So for those with a slower swing speed demand a more flexible shaft. Otherwise, it feels very stiff during the swing movement. And with a fast swing and flexible shaft, it becomes difficult to control the direction of the shot.

When it comes to women golf irons, more often than not, these are equipped with lightweight graphite shafts. Simply because graphite material is lighter than stainless steel. And absorbs more vibrations.

On top of that, graphite shafts offer a softer flex. And you and I have already established that slower swing speeds require less stiffness and more flex in the shaft.

Women golfers often end up using golf irons that are either too long and/or heavy. This is why it’s so important to choose golf clubs specifically designed for women as these are shorter in terms of length. They’re suitable for the average height of women golfers, which is between 65 inches and 69 inches. That’s between 5-feet 5-inches and 5-feet 9-inches tall.

And if you’re shorter than the average height, then there are “Petite” size golf clubs as well. These are even shorter and also lighter in comparison to standard golf clubs for women.

So how about measuring your golf club size.

Women golfers are better off using irons equipped with tungsten weighting and low CG. The former allows you to locate the precise position of the CG in every iron. And as for lower CG, it increases ball speed and launch angle.

There’s just no denying that hybrid clubs are much easier-to-hit long irons. And also more forgiving than long irons.

When mixing different brands, make it a point to check the golf club loft. Because sometimes 6 irons are lower lofted in comparison to 5 hybrids. And that’s a gap you don’t want in your golf bag.

In that case, wedges are very important too.

Women’s golf irons with a more rounded and wide sole are much preferred as they improve turf interaction to a great extent. And if that’s your goal, then stay away from irons built with a larger clubhead.

What Is the Perfect Golf Iron for Beginners?

Here’s a straightforward answer. The best golf irons for beginners is one that’s extremely forgiving, so it should have a lightweight graphite shaft and wide clubhead with low CG.

Which Is Better for Women - Mid Iron or Small Iron?

Long irons are the most difficult to hit. Easier than long are mid-irons. And easier than mid are small irons. Easier for whom? Easier for women golfers with slower swing speeds. And why is that? Because an increase in the loft and a decrease in the shaft length make golf clubs easier to hit.

How Long Should Golf Irons Be for Women?

The standard length of any women’s golf club is about 43 inches. This applies to average female golfers that are between 5-feet 5-inches and 5-feet 9-inches tall.

Now you understand why playing with the right golf iron set is an important part of the game. It makes your round of golf much easier. Most female players strive to generate clubhead speed and boost distance. And what better than golf irons to help you achieve those goals.

And, lucky for you, many golf club manufacturing companies are now crafting all types of irons to pave the way for women players to get the golf ball airborne in a much easier manner. So even an average female golfer gets the opportunity to maximize distance potential.