Choosing the right golf balls is more important than most people realize. However, with so many options out there on the market, knowing which ones to use has never been easy.

In this instance, we are going to focus on one company, and that’s Chromax. So, let’s see what their golf balls are all about, and how they could end up affecting your game.

Launched back in 2007, the entire idea of Chromax golf balls is to move away from the traditional white that you see everywhere. So, they brought some bright colors into play, and that also means some metallic colored golf balls can be added to your bag.

Now, you have to remember that the color is only affecting the outside. It’s merely a design concept rather than the color affecting the way the ball acts in the air, and on impact.

However, the best way to examine how they act is to look at several of their golf balls. 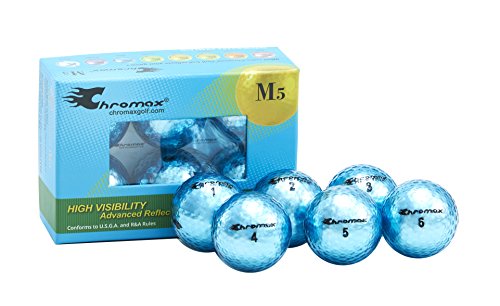 With the Chromax M5, you will have a ball that comes with a low compression of 75 while its target market is basically anybody that has picked up a golf club. Also, the cover of the ball has 302 dimples, so that’s slightly lower than standard.

In this instance, Chromax decided to reduce the number of dimples and increase their size. The idea here is that it will lead to you getting the maximum distance possible from your shots.

The M5 comes with three layers. This consists of a high energy core at the heart, a strong poly-resin cover, and then the metallic effect placed over that.

In all honesty, there’s little difference here with other balls on the market designed to help with distance. However, if you like the metallic effect, then these balls will be perfect. 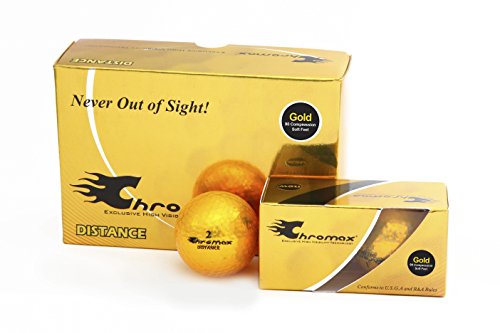 Now, when you name a ball ‘High Distance’ then that’s making a real claim. This ball has a compression rating of 90, so that’s better for those players with a lower handicap and a faster than normal swing.

This combination, along with the 482 dimples, will result in the ball being pushed through the air, so it should improve the distance aspect.

Also, this ball only comes with two layers. With the core, you are looking at it containing titanium powder, and that helps push that distance while it also offers better performance.

Overall, these balls are going to provide some real consistency, at least from the ball, and it’s all up to you to make sure your swing matches up.

More About These Two Balls

Now, Chromax do produce other balls, but let’s just look a bit closer at what is on offer from the two varieties mentioned above.

As you see, they do produce balls with varying compression rates. Knowing the rate does help you to gain a better understanding of how the ball may act in the air.

However, there’s little difference in the way that they go about the construction. They still produce the same covers on balls, their dimple patterns are not that different to what you will see elsewhere, and the balls react the same in the air.

Chromax has made a big deal out of having high distance balls, but if you look closely at what they do, then it’s no different to other names out there on the market.

All they have done is to look at the number of dimples, their positioning, the compression rating, and how to get the ball to travel through the air with ease. Any semi-decent golf ball manufacturer does the same thing.

Now, to their credit, they do state that their high energy core is one of the biggest in the history of golf balls, and that’s a big claim to make. However, by creating that high energy core, it’s hoped that the energy is then transferred into the flight, and that will indeed help gain a few more yards.

Can the Balls Be Controlled?

The final point to consider with Chromax balls is whether or not they can be controlled with ease, and the answer is that they have thought about the control aspect in their design.

This all comes down to the compression with Chromax, and you should be looking at something in the region of 75 for this particular purpose.

The good thing about the different balls they have on offer, is that most of them will state how they are for pretty much every player, and that they almost always provide a reasonable sense of control over your shot.

This is where the layout of the dimples and aerodynamics come into play. However, they are still using the same approach as other manufacturers, but then you can hardly blame them.

Let’s face it, there’s only so much you can do when it comes to innovation with a golf ball. It’s not as if you have a lot of room to mess around with, so it’s not their fault.

So, should you bother with buying Chromax golf balls? Well, if you are expecting some innovation when it comes to golf ball design that will suddenly make a difference to your game, then this is going to be minimal.

However, if you are fed up of the boring old white ball and want to jazz things up a bit, then Chromax is going to be right up your street.

Oh, and one other possible advantage to think about. Having a ball that is not white may improve visibility as it flies through the air. If this is something you struggle with, then it could be the case that this is the answer for you.

That is the main difference here. Chromax golf balls make a statement, but on the plus side for them, they manage to make this statement without it negatively affecting your game. That would be a disaster.

Thankfully, they have managed to avoid this, so if you want some color on the course, then changing things out for Chromax balls may very well be your answer.