Comparing similar clubs from two different brands is always interesting and exciting. Seeing how different brands tackle the same issues can result in some cool results, and it also makes life easier for you when it comes to knowing which clubs to buy.

In this instance, we are going to compare two very well known names in the industry with the Ping g410 irons up against the Callaway Mavrik.

So, which is best? Are they similar, or completely different?

The first thing to mention about the Ping g410 irons is that this is the latest version of something that has been around for years. However, it’s clear that Ping is seeking to perfect this range of irons with some subtle changes on board in the g410.

This club is streamlined, and it certainly flows through the air with ease. It also has a high MOI, so that means it’s also very forgiving with less twisting when you address the ball.

This high MOI is further enhanced by the weighting being in both the toe and the hosel. But then, the face of this club is where things get really interesting.

With the Ping g410, you have a hinged face, and that offers a greater sense of flex when it comes to addressing the ball. By flexing, it does mean less power is lost in that way, so you will be able to get better distances with this club.

However, if you are worried about possibly losing control with this floating face, then that is where the weighting comes into play. It helps to balance out the club meaning you should be able to get some pretty good accuracy with this club.

What is the Club Designed to do?

With the Ping g410, you are looking at a club that is about both distance and accuracy. It’s less about speed and raw power, even though it spends a lot of time in trying to preserve the power at that point of addressing the ball.

Who is the Club for?

Due to the fact it’s more about accuracy and distance, it’s felt by many that the g410 iron is more suitable for people with a mid handicap. That is because this club will be capable of providing you with greater flexibility on your shots than other irons.

Also, while it is highly forgiving, there are other irons out there that have a better sweet spot and will really work at eliminating those mishits. 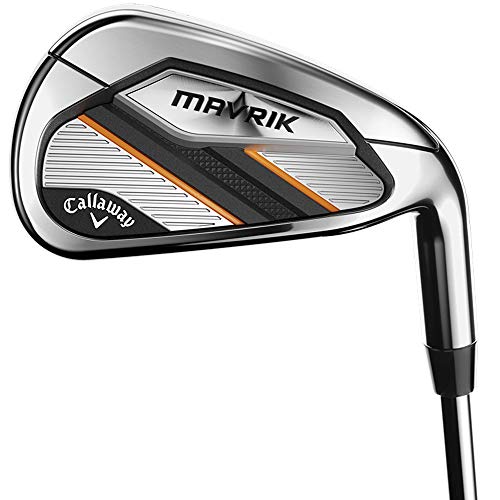 The thing about the Callaway Mavrik set of irons is that you know when you hold the clubs that you have something crammed full of technology.

The face of the club is a prime example of what we mean by this.

Each iron has a unique face which is designed to increase speed and reduce the amount of power lost when addressing the ball. This should then lead to you being able to get better distances without even changing anything to do with your swing.

This club is also going to get the ball up into the air a lot easier than the g410. It does this by changing the loft angle that you get with the different irons as they are lower than it is with the g410.

That is huge if this is an area where you are struggling. This difference in loft angle applies no matter which iron or wedge you are looking at.

But it’s the predictability of using this club that helps it stand out. It is consistent in the kick, the spin it produces, the angles, and ultimately it means you will relax into your shot as you already know what the club will do for you.

What is the Club Designed to do?

This club is designed to make you feel as if you can hit the same shot over and over again. It does this by being very precise in transferring power from club to ball, and also the way in which it adds spin and trajectory to your shots.

This club is less about speed, and even slightly less about being forgiving of mishits, than other irons on the market. However, if you feel that you have less control over your iron shots, then these irons could change that in an instant.

Who is the Club for?

This club is still aimed more at the mid handicap player who is struggling with a few areas of their game. The way it helps you get the ball up off the ground is a real bonus.

How Do the Two Irons Compare?

So how do the two irons actually compare against one another?

Well, first of all, you should have realized that they both target the same type of player, at least from a handicap perspective. Both are designed to help mid level handicap players rather than those individuals starting out.

They are both less about speed and instead focusing on other parts of your game. However, they do then tackle issues in different ways.

The g410 is more about accuracy and distance. The Mavrik irons are more about consistency and a better ball flight.

Now, both are good at what they do, and it does then mean you need to be aware of your own game and where your issues lie to then get a better understanding of which club is right for you.

Who Should Buy Each One?

To decide which club you should buy, then think about it from this perspective.

First, you want to know where your problems are with your game. The g410 will work best if you are losing out on some distance on your iron shots and where power is less of an issue than the distance problem.

At the same time, the Mavrik will help to tame your shots and provide you with better control over where the ball is going. This is important if you tend to be a bit wayward with your iron shots, so the Mavrik will sort out that problem in next to no time.

But Which One is Best?

It’s tough to say which club is best since they both do things slightly differently to one another. However, we can check out this table to see which one may be capable of slightly bettering the other.

What you can see from this table is that it really is a close run thing. However, if we need to pick a winner, then it would need to be the Callaway Mavrik, and allow us to explain why.

In golf, you want consistency with your shots. You want to be able to trust the clubs you use, and know that they will perform just as you want them to.

That is exactly what you get with the Callaway Mavrik. They are not going to leave you feeling short-changed with your shots no matter which iron you end up using in the set.

Also, the way they can help you get the ball up off the ground is also not something we should overlook. This can change your game as you won’t be scuffing the ball along the deck, or finding it harder to get out of trouble.

This isn’t to say that the Ping g410 is a bad iron. That is just not true. This club is excellent in its own right, and it will work well for people struggling with distance, but where they don’t want to rely purely on power to change things.

Ultimately, buy the version that fits best with your game, and then you can see how unleashing the full potential of the club will make a difference to your game.