When it comes to finding the right clubs for your bag, one of the areas where people tend to struggle is with the putter. After all, the wrong putter for your game will lead to numerous additional shots being added to your round, and nobody wants that to happen.

Here, we will focus on just one particular putter to see how it could potentially affect your game. So, which putter is getting all of our attention today?

So with the S7K, the first thing we need to mention is that this putter is indeed free-standing. Basically, you can place it behind the ball, then step back and check the alignment without being right over the putter itself.

While this may be an unusual approach, there’s no doubt that it is something that does actually work.

The top of the putter also has various alignment tools, and that works well in combination with you stepping back. The entire aim of this putter is to be able to remove those 3-putts from your round, and they claim that this approach will do exactly that.

If you look down on the putter from above, then you will notice two flanges coming out the back. In between those flanges are a series of lines to help with the alignment, and then the rest is up to you.

The Feel and the Sound

Moving to how this putter both feels and sound next as both of these areas are more important than most people realize.

The first thing that will strike you when you pick up this putter is that it is relatively lightweight. In saying that, you still feel you have ample control over the putter, and that’s because of the balance of the club.

But here’s one thing that cannot be overlooked, and it’s the grip. It feels different to what you would tend to expect on a putter, and that’s because they have sought to make things as light as possible.

With this grip, it may take some time to get used to it, but you will be able to look past this issue when you start hitting better putts.

For the sound, then it’s not the most inspiring of noises when you make contact. As with the grip, this is something that takes time to get used to, but as like before it will feel insignificant when you start hitting better shots.

Even though this putter is all about the alignment, it also comes with a huge sweet spot. Also, this putter is exceptionally forgiving, and you will need to hit one serious mishit for the putter to not then be able to cope with it.

You not only want your putter to perform, but you also want it to do what you expect. In the case of the S7K, then it performs pretty well. In fact, it performs better than you may expect when you first lay hands on the putter.

But most of the performance of the putter is the way in which you can set it up, and then step back from the shot. This directly influences how the putter plays, and that’s a good thing.

It does have a low balance point and, as was mentioned earlier, the light nature of the putter takes some getting used to. However, if you have the patience to work through that, then the performance of this putter is going to far exceed expectations.

However, we have another important point to make regarding this putter. The face of the putter is actually ahead of the shaft as it has more of an onset rather than an offset attributed to it.

This will, once again, make you change your approach to playing your shots with this putter. It does change how you swing just a tad, and it will take some getting used to.

Basically, when you pick up this putter it’s not going to be one of those clubs where you can just start hitting amazing putts straight away. It will take some time and effort to get used to it, but if you have had problems with alignment, then this putter can certainly counteract that.

This putter is undoubtedly for people struggling with the alignment and where they just feel as if they are getting nowhere with other approaches.

It does focus primarily on this issue, so if you are not struggling in this area, then the putter may not be the best option for you. 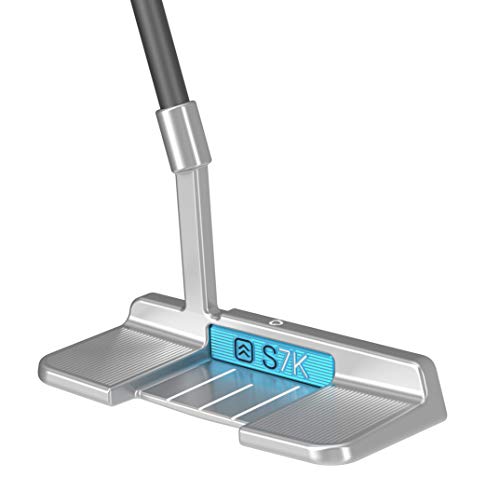 The S7K putter is different to most putters on the market. The fact that it is free-standing and deals with alignment issues is what makes it stand out from so many other options that are out there.

However, it’s not a putter that cannot be taken straight out onto the course with the idea of it making a huge difference straight away. It takes some getting used to, and it’s recommended that you get to work on the putting green before you play a round.

So, will this putter work and help with your game?

Well, it should make a difference with the alignment. The real problem is the way in which it slows down your game by having you step back away from the putter, and then get yourself settled down into the shot.

But if you are willing to look past doing all of that, and the people you play with aren’t concerned or annoyed, then this putter should work.