While TaylorMade may be better known for their amazing drivers or irons, don’t forget that their putter range is also pretty impressive in what it can offer.

Here, we are going to focus on just one of their putters, and it’s the TP Patina Ardmore 3. So, what can it do for your putting game, and is it worth investing in this putter to add it to your bag?

The Ardmore 3 is an impressive looking putter from a design perspective. It not only has a face balanced design, but it has shorter fangs as well. This helps the putter to sit softly on the green, while it also makes lining up your putt a whole lot easier.

The toe hang that comes with this putter is also going to be perfect for anybody that has a pretty significant arc in their swing. However, the toe hang doesn’t put you off your shot while the single sightline means nothing will disturb you when getting your shot ready.

The face does come with a slightly thicker than normal aluminum pure roll insert. This is designed to not only give you more of a solid sound to your shot, but you will also experience better feel at the same time.

Basically, this putter will then give you a substantial amount of feedback from your putts allowing you to make adjustments to your game.

The Feedback and Feel

So much of your putter is going to be related to the feedback it can provide, and also how it feels. In this instance, the Ardmore 3 excels in both departments.

First, that insert does increase the feedback you get thanks partly to the sound impact. You are going to instantly know how well you have struck the ball thanks to that insert, and that alone can change your putting game.

But the feel is also important.

In this instance, you have a putter that is neither too firm or too soft. It forces you into making real contact with the ball, and it does mean you need to have some confidence in your stroke to get the best out of it.

The Ardmore 3 is the type of putter that’s perhaps not best for those starting out in playing golf for that very reason. Yes, it has an impressive sweet spot, and it won’t really punish you for mishits, but it’s the feel aspect where you will learn so much.

The Ardmore 3 does come with an adjustable weight system. You can purchase different sole weights that fit into the Ardmore 3 so it can then work with you on your shot providing you with something closely resembling a custom putter.

This is an impressive addition to any putter. Being able to play around with these sole weights should mean the putter feels perfectly balanced in your hand, and that leads to more confidence in your shots.

This putter also comes with a Small Curve Hosel. This provides you with a clear sight of the putter, so once again it’s not going to interfere with lining up your putt.

This may be something you need to get used to when it comes to your putter. However, the curve is not too drastic, and a few shots on the practice green should be enough to allow you to come to terms with it all.

This putter is going to play true to form. The thicker aluminum insert does help with producing a good roll, but at only one degree of loft, it may lead to some bobbling on certain greens.

However, you can have confidence that the ball is going to run along the lines you expect, so you can trust your alignment without having to stress.

Who is it Aimed at?

This putter can be used by any player, but it does work best for people with a high arc to their putting stroke. At that point, the design will pull the putter into position before striking, to create that true roll you are looking for.

Also, remember the point made earlier regarding the feel and feedback. This putter can be pretty sensitive, and you need to keep that in mind. If your game is currently at the stage where you are focusing more on the putter rather than understanding feel, then this may not be for you either.

However, the majority of players will have a positive experience with this putter, even if they cannot get the maximum out of what it can offer. 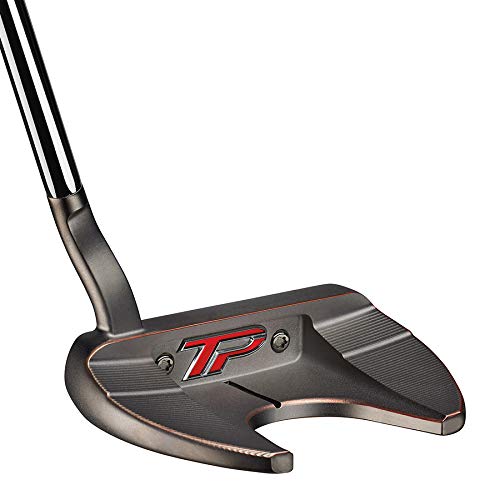 The TaylorMade TP Patina Ardmore 3 putter is an impressive club, but then so is the entire range. The mallet style putter is well-balanced, and the way it makes aligning the putt so easy is another huge bonus.

The only downside is the way in which it’s more designed for those with a high arc to their stroke. That does eliminate some people, but that’s not to say it won’t work for everyone.

TaylorMade has produced a quality putter that goes big on giving you a solid feel to your putt. It makes it easy to line things up as well, and that is always something you want from your putter.

While they may not be that well known for their putters, the Ardmore 3 shows they can produce a quality club, so it could very well be the perfect addition to your bag.